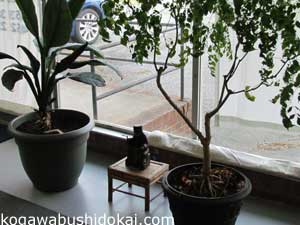 There are three martial maxims that everyone should follow.

1). You should never be defeated because your enemy has a fierce reputation.

2). You should never be defeated because your enemy has a fierce appearance.

3). You should never be defeated because you have not trained and prepared properly.

1. Fierce reputation: We all know these folks. Some have notoriety in competition, some are skilled martial artists and instructors, some are in the world of crime, and some are local toughs. Many are just built up through rumor and second and third hand gossip.
“Personality” should be erased in your mind, the enemy’s personality and your own. He is just a target, a motion in the field of your awareness, a threat to your life that must be eliminated. He may have the fiercest reputation in the country; everyone may know and fear him but, when he appears in front of you, he ceases to exist as an individual and becomes prey.
You are no longer “Gene,” or “Tony,” or “Richard,” or “Ed,” or “Cliff,” or “Dennis.” You aren’t the guy with the wife and kids you love, or the job to go to, or the hobbies you enjoy. Neither are you the guy with the sore leg, who is a little overweight, hungry, tired or worried about bills. Those things weaken you (loved ones strengthen you subconsciously, but you can’t consciously worry about them.) You are just empty, alert, and focused on defeating this thing.

2. Fierce appearance: My own generalization about this is that the more someone has to appear tough, the less they are so. Your enemy depends on his fierce appearance to gain advantage psychologically. You can use this to your own advantage (by appearing to be scared, for instance). BUT, there are those who look fierce and are fierce and capable enemies. You cannot assume they are using their appearance to mask weakness. So, this kind of blends with number one: de-personalize your enemy in both appearance and reputation.

3. Lack of preparation: This should be self-explanatory. Stay in shape. Train regularly. Train with different people and don’t always use the same partner. Push yourself. Ignore minor injuries and discomforts, endure moderate pain and discomfort, learn situational awareness…be aware of where you are and who is around you. Avoid trouble and places where trouble might happen. Keep your weapons in top condition and accessible.
____________________
I read, years ago, in Sheldon Kopp’s book, “If You Meet the Buddah on the Road, Kill Him,” this statement: “If you have a hero, look again, you have diminished yourself in some way.” That bothered me for a long time. There is even a “hero” thread running on Budoseek now. But, he is right. I have “mentors” and people whom I respect tremendously. I try to incorporate their good qualities in myself. But, they are not “my” heroes. Once you use the possessive, you have attached yourself to them in a way that is submissive and self-defeating. This is not “ego” or self-righteous thinking that you are better than anyone else. I think it is related to number one above. If you are serious about being a martial artist (warrior is over used and I think should be reserved for those whose profession is arms) part of getting rid of “ego” is getting rid of things like “heroes” and idols. You are empty. Mushin/zanshin. You never know who you’ll have to fight. What if your opponent looks like or reminds you of your “hero?” What if he trained under your hero? What if he IS your hero? In self-defense, you cannot afford these little “egoisms.” Oh, what was Kopp’s point about the Buddah? He is inside you. If you see him out there, it is illusion. Satori is beyond you still.

Actually, Higoshi Sensei said they were from “an old book.” They are probably public domain. I was guessing maybe they came from the “Hagakure” or somewhere like that. I’m pretty sure they are from kenjutsu sources.

These Maxims are the opposite approach of 3 principles of losing a fight according to samurai:

Kikioji: Being afraid, before fighting because of your enemy’s reputation.
Mikuzure: Being afraid because the enemy looks very fierce and strong.
Futanren: Inadequate training.